Use your head! It’s infinitely better 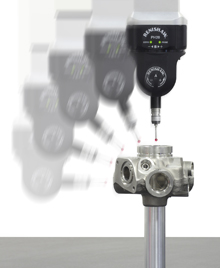 Unlike conventional touch-trigger measurement methods which rely on speeding up the motion of the CMM’s 3 axes to measure quickly, PH20 utilises the head motion technology developed for the multi-award winning REVO system to minimise the dynamic errors of the CMM at higher measurement speeds.

PH20’s unique ‘head touches’ allow measurement points to be taken by moving only the head, rather than the CMM structure. Points can be taken faster, and with improved accuracy and repeatability.

PH20’s infinite positioning capability guarantees optimal feature access, minimising stylus changes. The 5-axis simultaneous motion allows larger parts to be measured on the CMM by minimising the space required around the part for head rotation. PH20 automatically aligns itself with the part co-ordinate system, avoiding stylus collisions and the requirement for accurate fixtures. 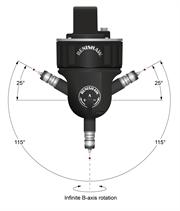 The unique ‘inferred calibration’ technique developed for PH20 determines the head orientation and probe position in a single operation, allowing subsequent measurement at any head angle. Further modules only require a few touches on the calibration sphere before use (enhanced metrology performance is available if needed by calibrating the probe tip at the feature orientation).

These dramatic time savings accumulate as the calibration process is repeated on a regular basis to comply with quality procedures or following a probe crash. 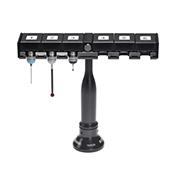 Users of the PH20 probe head will immediately have access to the range of proven TP20 probe modules, providing a wide selection of trigger forces, directional sensing options and extensions to meet application requirements. The detachable modules provide crash protection and can be automatically changed using the TCR20 change rack.